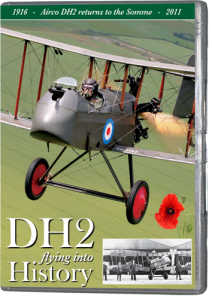 A new DVD has been released featuring a wonderful WW1 DH2 Replica watch, which is based at Wickenby Airfield in Lincolnshire.

Joanna and Simon White from Primetime travelled with Wickenby’s DH2, Chipmunk and RV10 team, to the Somme area of France last November to record their unique act of remembrance – returning the DH2 aircraft to the skies of the Western Front for the first time in 93 years!

Entitled ‘DH2 – Flying into History’ the film details the short but important history of the DH2 aircraft, which was responsible for reclaiming the skies over the Somme in 1916. The Fokker Eindecker had been an overwhelming force for the German Air Service for too long, and the Royal Flying Corp were desperate to match this threat.

The DVD documents every step of the journey of this unique aircraft, as it cruised south to Duxford, then Headcorn. Pilots Stewart Smith (DH2) and Lee Brocklebank (accompanying Chipmunk) were filled with trepidation as they set out across the English Channel, which thanks to a steady headwind took them 30 minutes to cross. But it was all worth it when they passed over French soil again and landed at the Somme airfields of Abbeville and Albert.

The camera team recorded the journey from the ground and from the air – with mini cameras all over the DH2 and a cameraman aboard the Chipmunk recording air to air across the Somme countryside. They also recorded the poignant service at Thiepval Memorial on 11/11/11, where the DH2 was to drop poppies, but the Somme fog had other ideas! The DVD also shows the unveiling of the memorial to Major Hawker and interviews with the DH2 team, historians and onlookers.

You can watch a few snippets from the film below and if you’d like a copy they are available from our online DVD store.

To read more about their journey then visit the Wickenby DH2 to the Somme blog.