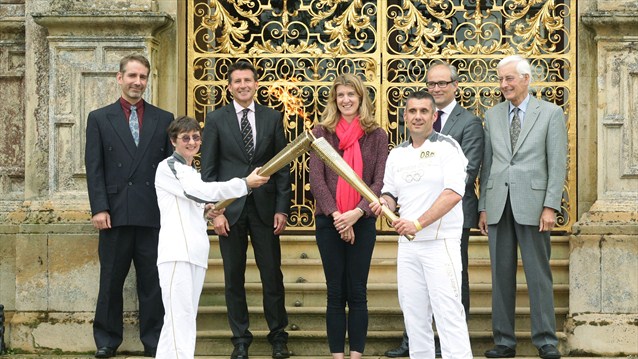 It’s been a very busy period for the Calendar News team chasing the Olympic Torch across Lincolnshire and Yorkshire, in the build up to the 2012 Olympic Games later this month.

On day 46 the torch arrived at Burghley House, Stamford, as Lord Seb Coe came to visit this stately home, once the residence of an Olympic Champion.

The torch was exchanged by two runners at the gates Burghley House in the presence of Lord Burghley, the 8th Marquess of Exeter, Miranda Rock and Lord Coe.

Lord Coe spent some time at the House and visited an Exhibition dedicated to the life and sporting achievements of David Cecil, Lord Burghley (1905-1981), his predecessor as Chairman of the Organising Committee of London Olympic Games, and winner of many medals. Cecil won gold for the 400 metres hurdles in the 1928 Amsterdam Olympics and silver in the 1932 Los Angeles Olympics 4×400 metre relay, and was considered to be the Lord Coe of his day raising awareness of the 1948 Olympics which he helped bring to London.

The following day took Simon across the south of Lincolnshire recording the torch’s final journey through the Calendar region as it trailed through Market Deeping, Thurlby, Bourne, Spalding, Moulton, Holbeach (including a chat with Geoff Capes) and Long Sutton.  The reaction of locals ranged from excitement to awe as they witnessed this once in a lifetime event.

The Olympic committee hope the torch will “help shine a light on the whole of the UK – from dynamic urban areas to places of outstanding natural beauty. The Olympic Flame stands for peace, unity and friendship. It will be carried by 8,000 truly inspirational Torchbearers.”

You can keep track of the Torch’s progress by visiting the official website of the 2012 Olympics. They have regular photograph and video updates of the monumental journey and information about all of the torchbearers.

Burghley House will be hosting special Olympic Garden Parties everyday throughout the Games.  The south gardens will host a big screen showing coverage from Saturday 28th July to Sunday 12th August 10am to 10pm. You can find out more from their website.

And don’t forget to tune in to ITV Yorkshire’s award-winning Calendar for all the latest news from our region.